The dominant economy based on colonialism, industrialism and globalization is a linear extractive economy based on limitless extraction, commodification, profits, and the creation of waste and pollution by the rupture of natures cycles of renewal. It has no place for the care of nature and community. It has no ethics of giving. It leaves nature and society impoverished, be it extraction of minerals, or pollution ,including Green House Gas Emissions, or extraction of knowledge through Biopiracy, or extraction of “genes” through genetic mining, or extraction of personal data through “data mining”, or extraction of rents and royalties for seed, water, communication, privatised education and health  care. The linear extractive economy encloses every commons that we care for and share , and reduces it to private property, including the “intellectual property” on seeds, biodiversity, living organisms, living processes, including “data” from our minds and bodies.

It creates poverty, debt, and displacement. It creates waste -waste as pollution, wasted resources, wasted people, wasted lives. It creates a world without work, but imagines that people without work will all be “consumers” of junk food, junk clothing, and junk communication. It is this extractive money machine which has led to the rise of the 1% and disposability of the 99%. 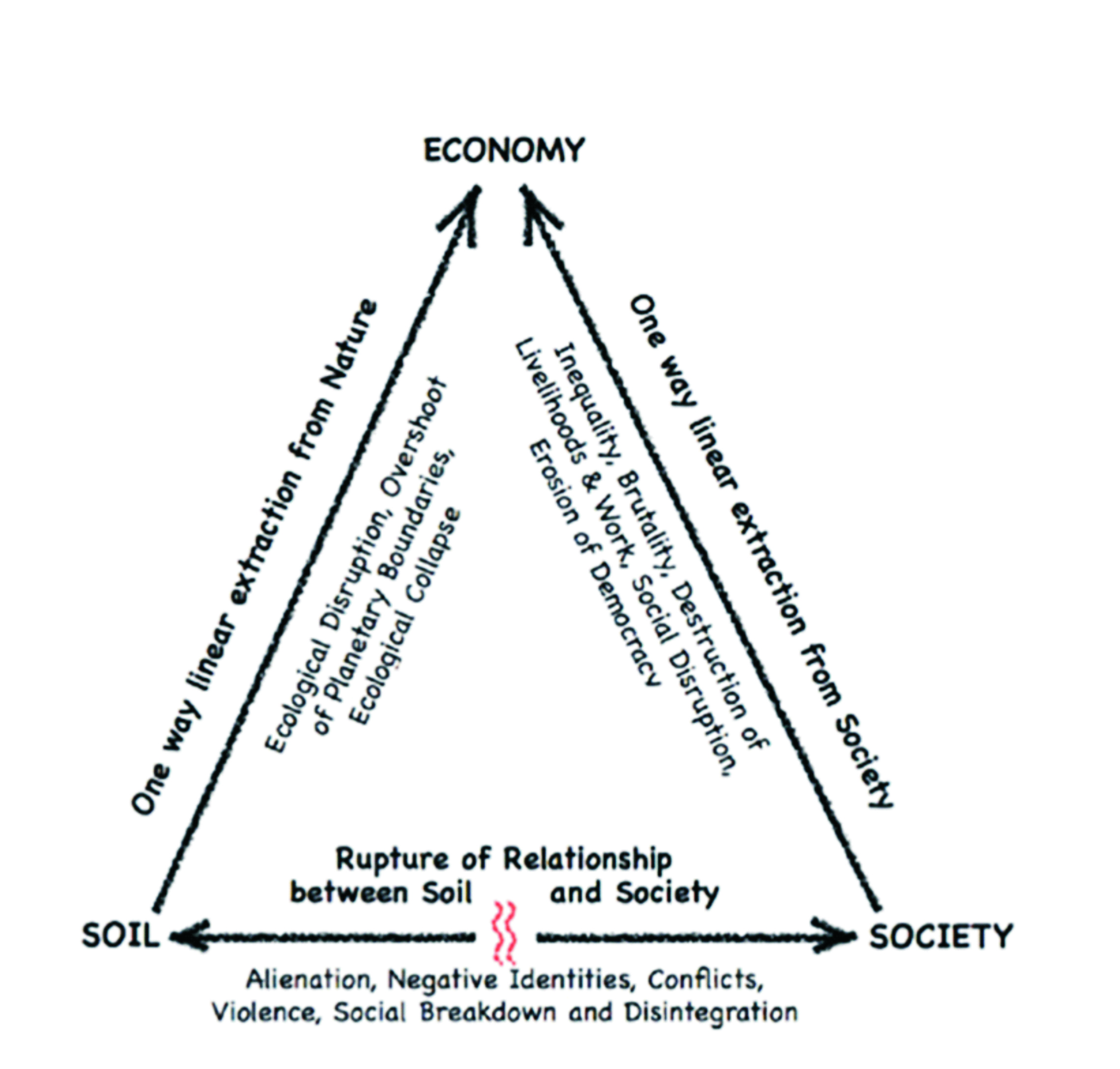 Poverty is not the original state of nature or earth centred economies of local communities. The dominant economic program creates poverty, the economy of the 1% punishes the poor.

The poor are poor because 1% have grabbed their resources and wealth. Peasants are getting poorer because the 1% are promoting an industrial agriculture based on purchase of costly patented seeds and chemical inputs, which traps them in debt, and destroys their soil, water, biodiversity, and their freedom.

Street vendors and hawkers are loosing their livelihoods as e-commerce firms with a very heavy negative social and ecological foot print are displacing their livelihhods, and destroying the networks of trust that build local economies. The Corona lockdown increased the control over distribution to e-Commerce giants like Amazon. Jeff Bezos increased his personal wealth by $24 million in a month of Corona lockdown. Even the so called “reforms” announced were precisely the processes which have contributed to the agrarian crisis.

The FSSAI, which is the agency for food standards, has been captured by the junk food industry and is imposing unsafe foods on people and spreading disease and creating destruction of livelihoods. FSSAI has recently announced new guidelines to attempt to lock all farmers, street vendors and hawkers into an Amazon slavery.

All values that arise from our interdependent, diverse and complex reality have been displaced or destroyed by extractive economies based on the greed of a few. When reality is replaced by abstract constructions created by the dominant powers in society, manipulation of nature and society for profits and power becomes easy. The welfare of real people and real societies is replaced with the welfare of corporations. The real production of the economies of nature and society is replaced by the abstract construction of capital. The real, the concrete, the life-giving gives way to the artificially constructed currencies, artificial fertilizer, artificial food, artificial intelligence…..

Extractive economies do not create or produce. They extract what nature and people have created and produced. Extractive economies do not generate or regenerate the conditions of life. That is why they lead to collapse of ecosystems and of economies, of societies, cultures, and communities. Having contributed to collapse, they seek the next frontier to colonise, the next extraction to collect rents and royalties from.

Oikonomia, The Art of Living, is based on Circular Economies, Solidarity, Mutuality and cooperation.

The Art of Living is about generating and regenerating life – the life of all beings on the Earth, including our human family. Living economies sustain life, and life creates living economies which nourish both nature and society.

In organic farming and ecological farming we refer to this principle as “the law of return”.

Living economies are therefore circular economies that are aware of, and maintain nature’s cycles by giving back to the earth. The earth gives us food. When we give back part of her organic gifts to the soil, we act according to the law of return, of gratitude, of giving. When we give back organic matter to nature, she continues to give us food. The work in giving back is our work, our gratitude, our oneness. Giving us food is nature’s complex work -through her soil, her biodiversity, her water, the sun, the air.

All ecological crises are the rupture of nature’s cycles, and the transgression of what have been called planetary boundaries.

Given the lock down, more hands have returned to the villages. It is now time to regenerate both life and livelihoods based of farming, artisanal production, and distribution through circular economies, beginning with the local, expanding to regional, till the national economy becomes a circle of circles of circular, solidarity, self reliant economies. Gandhi had said I do not see India as a pyramid where the top crushes the bottom that supports it but ever expanding, never ascending ocean circles. Jaivik Bharat is an ever expanding oceanic circle which begins with self reliant small farmers, self reliant villages, self reliant regions to a self reliant India.

When economies are circular, every living being, every place, is the centre of the economy, and nature and society evolve and emerge from multiple self organised systems, like the trillions of cells in our body.

The circular economy replenishes nature and society. It creates enoughness and well being for all. In the care of the Earth and society, diversity of meaningful and creative work is possible. It is based on nature’s law of return. In nature, there is no waste, no pollution.

Because circular economies are based on giving ,indigenous communities can live over centuries in the same place. India has farmed on the same small pieces of land over more than 5000 years. Aboriginal Australians farmed the continent over 60,000 years. When you care for the Earth as your home, you can stay home in the same place.

Circular economies as living economies are by their very nature biodiverse, spanning from the intimate and local, to the global and planetary. 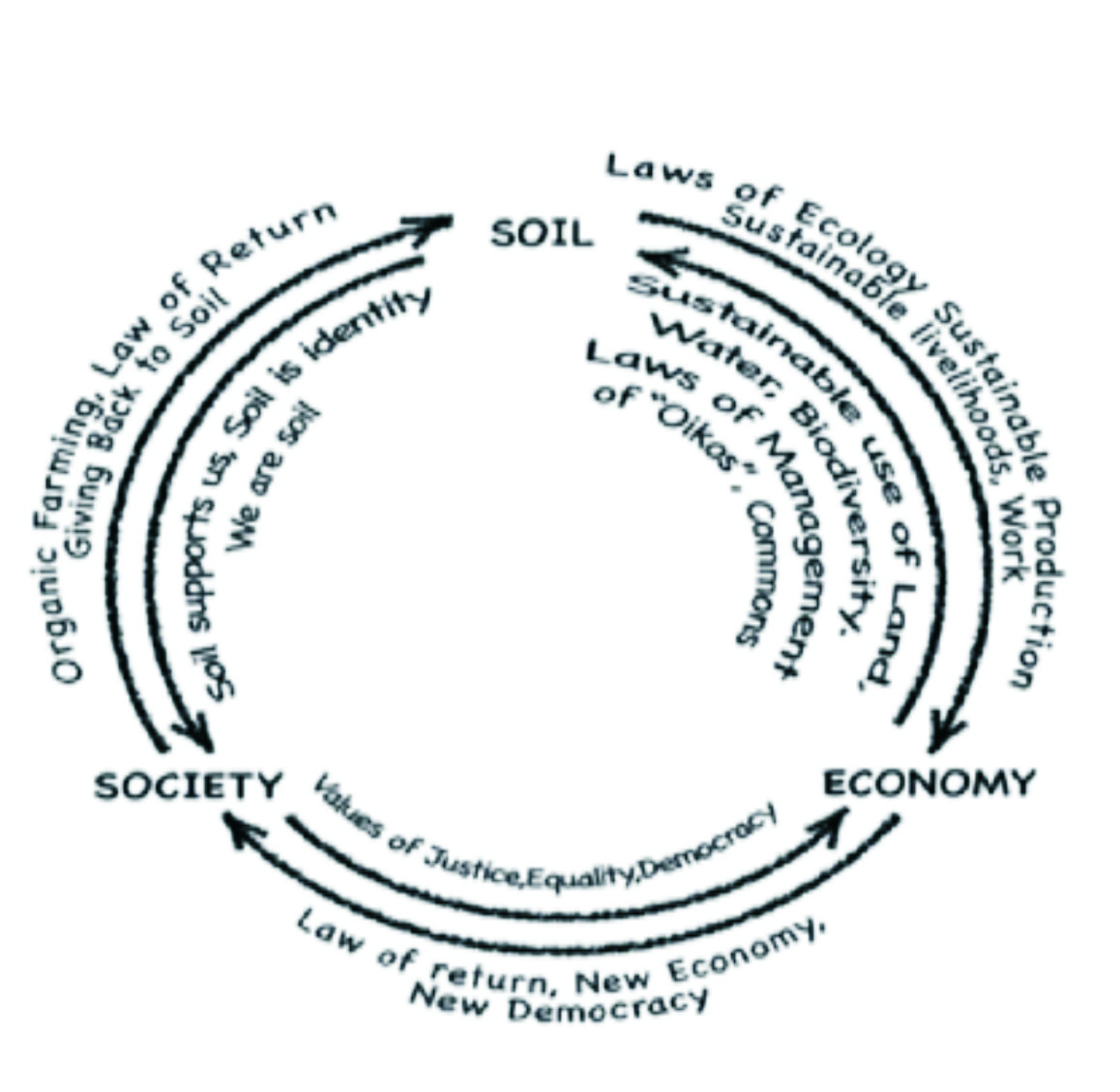 Just as self organised systems evolve in and through diversity, self organised economies are diverse. However the economic paradigm based on a linear one-way extraction of resources and wealth from nature and society has promoted systems of production and consumption that have ruptured and torn apart these cycles, threatening the stability of the natural and social world.

The seeds of a Self Reliant, Atmanirbhar Bharat lie in an Anna Nirbhar Bharat,a Food Sovereign India based on Seed Sovereignty (Bija Swaraj), Food Sovereignty (Anna Swaraj) Knowledge Sovereignty (Gynan Swaraj) Economic Sovereignty (Arthik Swaraj). A future of a food Sovereign, Food Secure, Livelihood Secure India lies in shifting from globalised linear extractive economies based on non renewable fossil and mineral resources, piracy of our knowledge and biodiversity, and extraction of the wealth we create through our work to circular, regenerative biodiversity economies based on biodiversity, cultural diversity, people’s ability to create and produce real wealth, circulate it in society for the well being of all by strengthening community, solidarity, cooperation, compassion.