India and South Africa approached the World Trade Organization (WTO) to waive off the patents through TRIPS agreements as per the norms in times of epidemics. The present global health situation is a pandemic, in these times, the entire world should be united in forthcoming WTO meetings for the survival of the people and humanity. — Dr. S. Lingamurthy

It may not be the appropriate time to say, but the present situation prevailing over the world cannot be masked. The Wall Street Journal, many other prominent scientific journals, and noted scientists have already conveyed that the present global pandemic named “COVID19” across the World originated with human intention from the Wuhan Institute of Virology, China, and spread throughout the world in a very short time, ‘unlike communism in 20th Century’, though nobody is interested to experience it. As communism had the policy of include, everyone, in the globe to bring the revolution for new society and power got succeeded by infecting the people with a virus tool, of course, the present virus credited with more than 167 million confirmed cases including 3.5 million deaths across the world and 26.94 million confirmed cases including 0.3 million deaths in India as per World Health Organization (WHO) up to 10:44 am CEST, 25th May 2021. This has resulted in not only health crisis but also unprecedented economic crisis and supply chain disruption throughout the globe and humanity crisis in corporate hospitals by charging exorbitant amounts even for dead bodies.

On 30th January 2020, the first case was reported in India among three medical students in the towns of Trissur, Alappuzha, and Kasargod of Kerala who has returned from Wuhan, China. On 12th March 2020, the first fatality was reported, who had a travel history with Saudi Arabia. There was a gradual increment in total confirmed cases and the number of fatalities across the country. Subsequently, the alarming situation led to a complete lockdown in India, which was announced on 24th March 2020 by the Hon’ble Prime Minister for 21 days and further extended two times till 31st May 2020, Hon’ble Prime Minister appealed to the public to ‘take care” and “help the poor within their means and fulfill their basic needs such as food” by following “social distance”. Shri. Narendra Modi Ji has taken this stringent decision where developed countries were reluctant to think this idea to safeguard their people because they have given prime importance to the economy rather than people and said “Older generation shall be ready to give up their life for the sake of younger generation and economy of the country”, and due to this the entire globe experienced what happened to the USA, Brazil and the UK.

Due to strict lockdown policies, India could relatively control the COVID19 outbreak, and it took more than three months to reach 1 lakh confirmed cases and 139 days for ten thousand fatalities. When phase-wise unlock has begun, COVID19 transmission velocity was very high and rampant in both confirmed cases as well as in a total number of deaths. There were 10.85 million confirmed cases including 1.5 lakh deaths during 1st wave of COVID19. Amongst, it took 110 days to spread one lakh confirmed cases, whereas it took about 60 days to unleash from one lakh to one million and from one million to 5 million confirmed cases. Later, within three months, COVID19 spread to the second half of 5 million people and caused 1.5 lakh deaths, thought all possible efforts made by front line doctors, health workers, and vigilant civil society.

There is no clear-cut demarcation between COVID19 first wave and second wave. However, as per the BBC report, the second wave of COVID19 started in India on 10th February 2021. Despite all problems, India could manage the bigger damage with less than 8000 confirmed cases and 112.5 deaths per million populations during the first wave.

The outburst of COVID19 Second Wave

COVID19 Second wave in India is certainly more destructive. The sudden surge of Pandemic in India has started in the second half of March and April months of 2021, which led to second position in the globe after the USA with 26.75 million confirmed cases including more than 3 lakh deaths. Though there were significant alerts from the Governments and scientific community, India could not control the caused damage as expected as it was done during the first wave of COVID. It took just 21 days to infect more than 6.7 million people including 1 lakh deaths in the recent past. Unlike the first wave, unfortunately, COVID second wave behaved like a tsunami and has infected and caused the death of youngsters, in some families, it is reported more than two deaths owing to COVID19. The trend of per million confirmed cases shoot up to nearly 2.5 times i.e., 19385 in second wave from 7868 of the first wave, and deaths per million has been doubled from 112 to 220 in just three months. The last 50 thousand deaths were registered in just 11 days; with an average of 4,545 deaths is the peak of COVID second wave. The pattern of new confirmed cases including deaths in the second wave is uneven, and the trend has been declining from 22nd May 2021 in both confirmed cases as well as daily new confirmed COVID death cases per million as observed in Graph-3, due to subsequent lockdown by the State Governments in India. 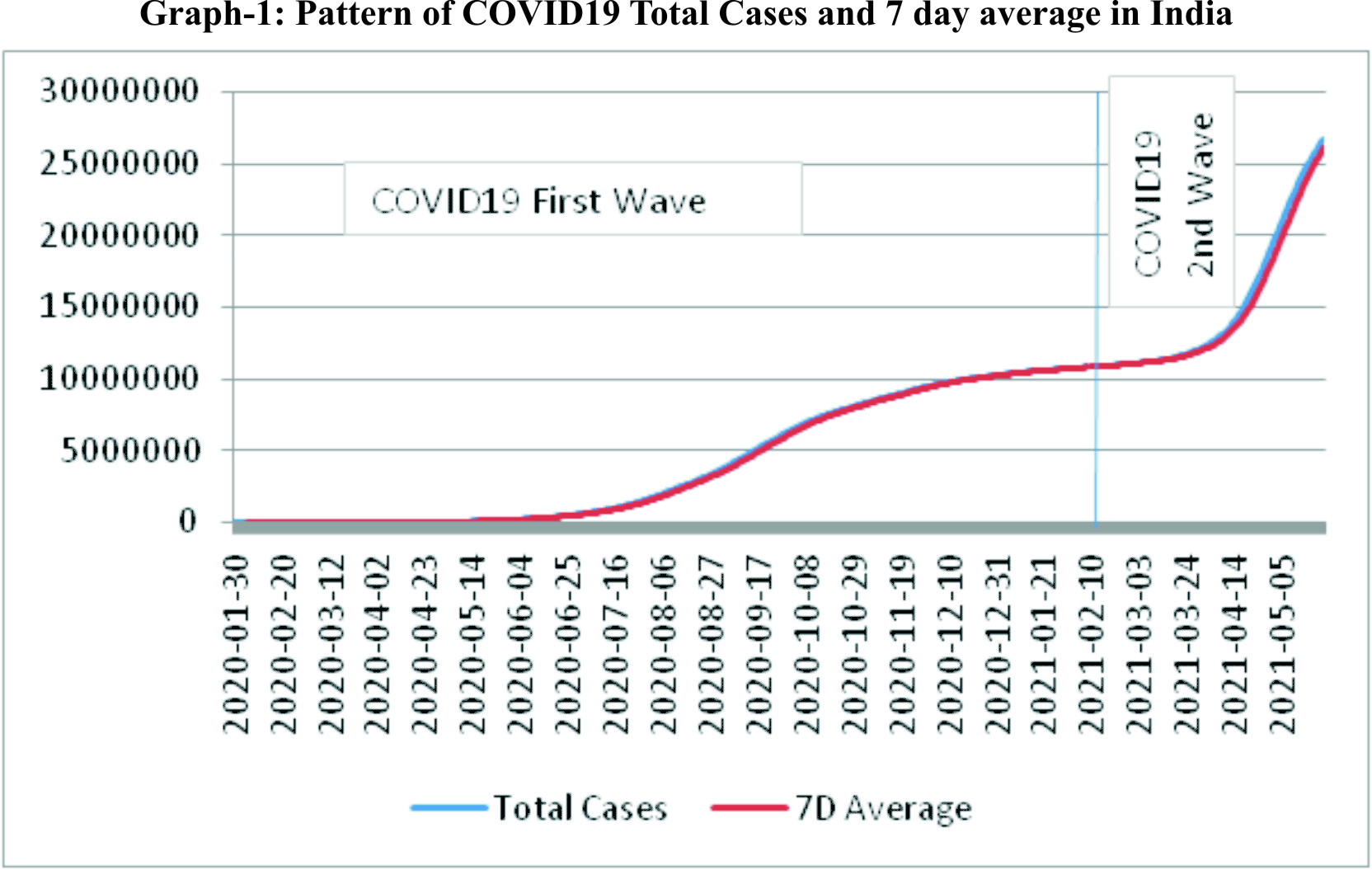 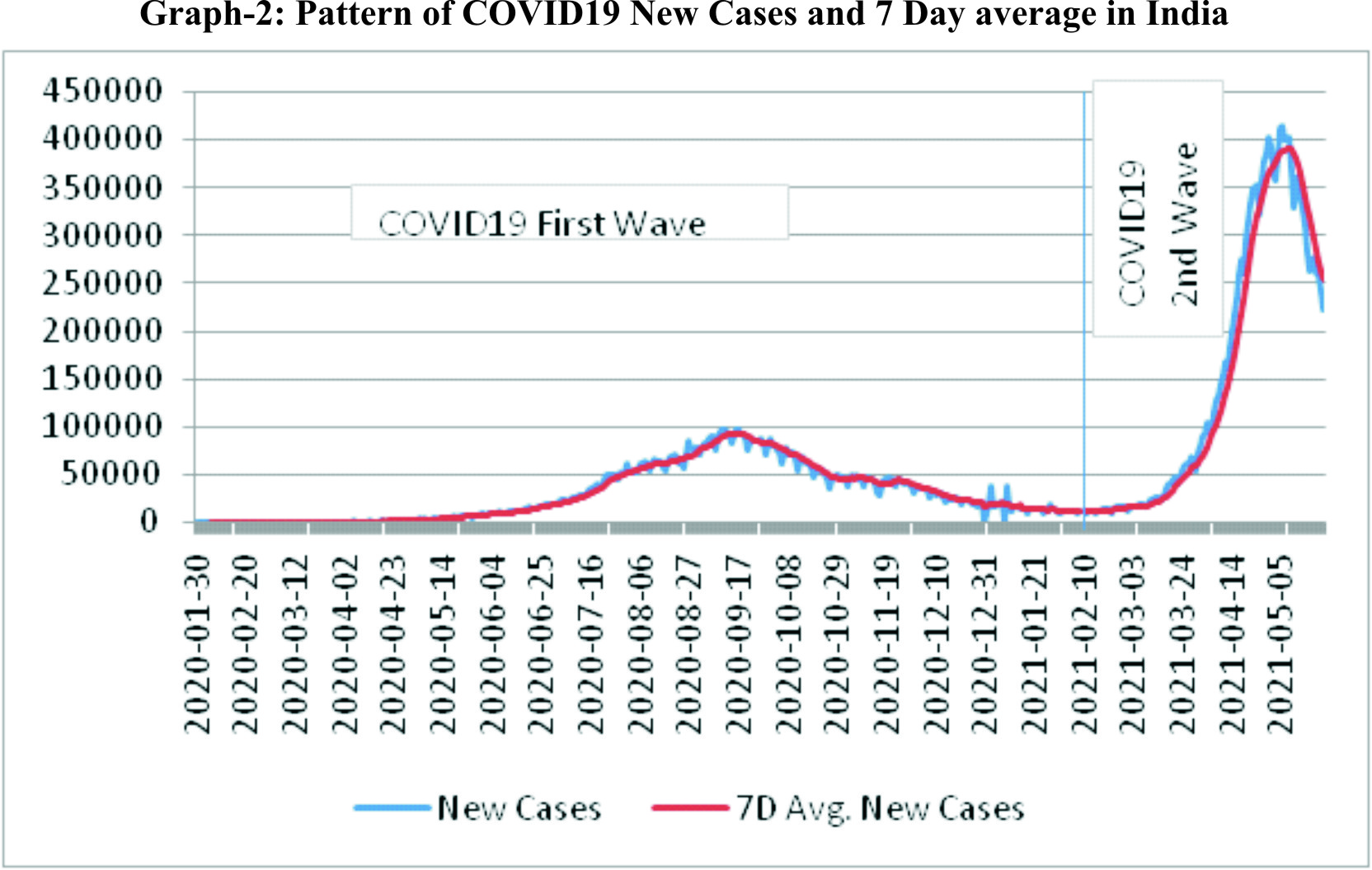 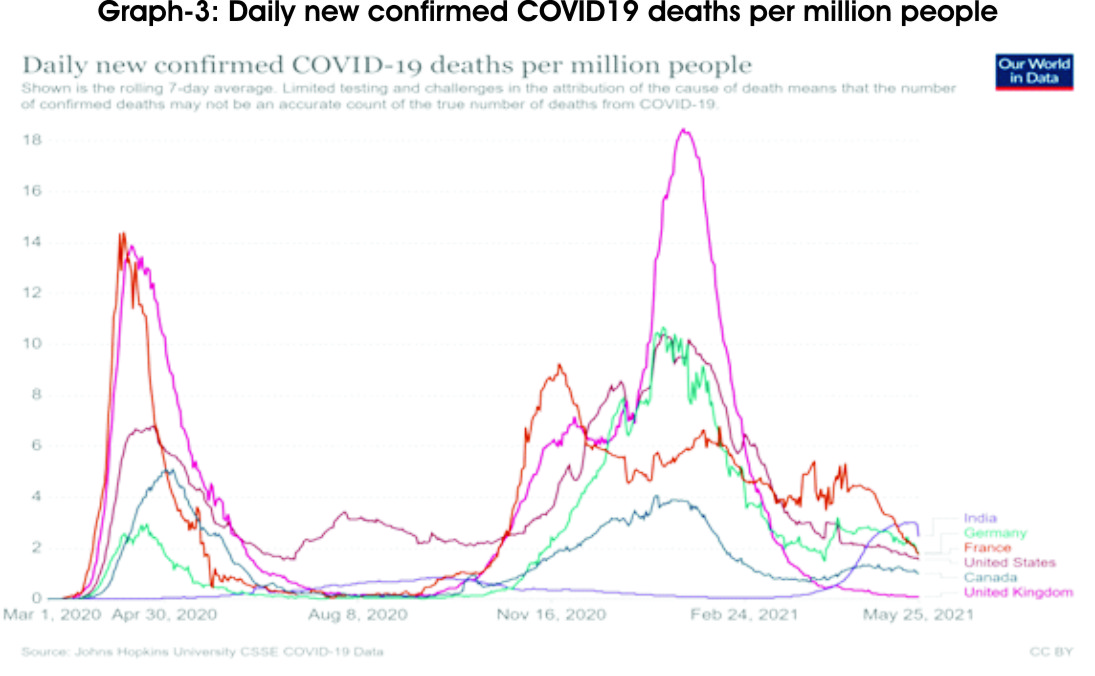 Against the Pandemic COVID19, vaccination tends to be the ray of hope, relatively to have less effect of COVID infection for the people and commencement of vaccine drive promises a return to more normal life and also has concentrated a global market worth tens of billions of dollars in annual sales from some pharmaceutical companies. In India, there is two variant of vaccines, i.e., COVAXIN, India’s first indigenous vaccine developed by Bharat Biotech, Hyderabad in collaboration with Indian Council of Medical Research (ICMR) and National Institute of Virology (NIV). Another one is COVISHIELD developed by AstraZeneca and Oxford University in partnership with Serum Institute of India (SII), Pune, Maharashtra. Other than these two vaccines, Moderna and Pfizer, Johnson & Johnson, Sputnik, mRNA, Sinovac, Novavax are available in the global market.

There is a huge gap between the demand and supply of these vaccines for the global population above 18 years old. The vaccine companies have to play a proactive humanity role in producing the vaccines and vaccinating the people at affordable cost and equitable access to everyone in the globe, because as United Nations pointed out “No one is safe unless everyone is safe”. The global pandemic needs to be controlled simultaneously in all parts of the world. Thus, hoarding of vaccines and medicines of COVID19 of vaccines is inhuman and unethical, which is being done by some so-called developed countries, and raising the prices of vaccines by catching the miserable conditions of the infected patient families is unacceptable, being practiced in super specialty and metro hospitals in India. Moderna targeted to capitalize the vaccine towards &18-$20 billion in near future. Pfizer already accumulated a net profit of $9.6 billion in a very short time and targeted to charge $30 per person per shot of vaccine is very costly for developing countries and poor people.

Due to the unavailability and shortage of vaccines in India due to its huge population, the vaccination rate is about 11 percent, which is very low compared to Brazil, France, Italy, Germany, the United Kingdom, the United States of America, and Israel. Canada, UK, and Israel vaccinated more than 50 percent of their people and the USA is near to it. The most populous country next after China is behind this vaccination drive, which needs to be supported by all vaccine-developed companies for the safety of humanity. 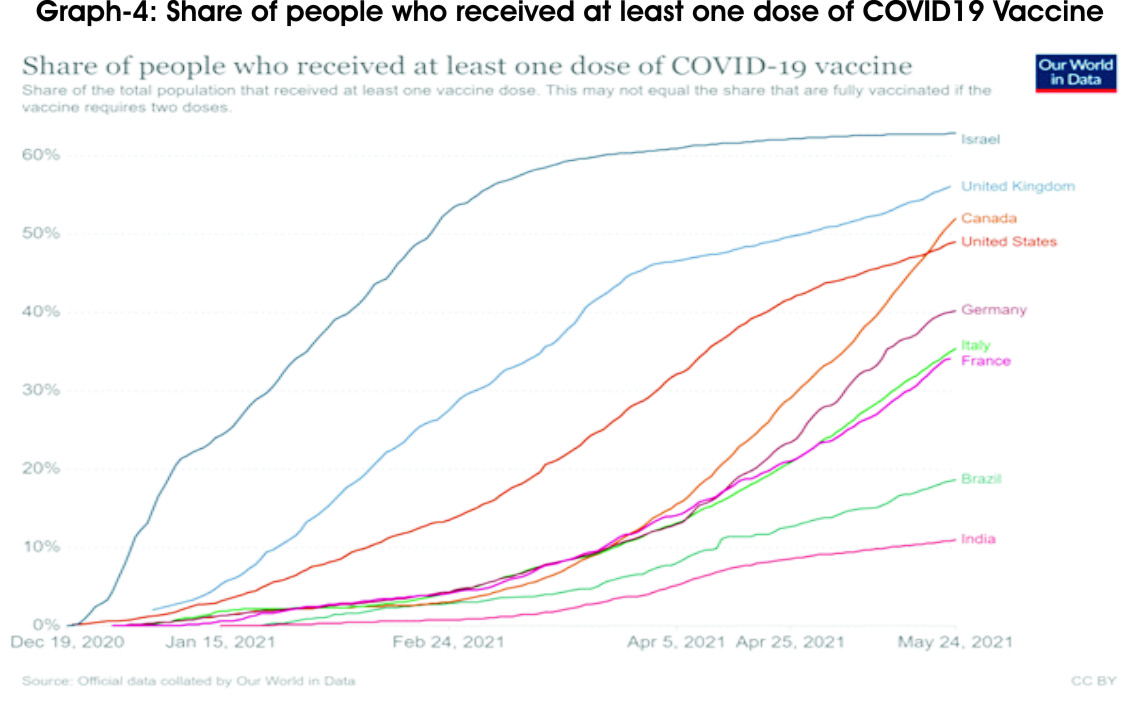 The majority of the population lives in developing and underdeveloped countries, given the fact that half of the poor live in South Asian countries whose approximate absolute numbers are 534 million people, who live below $1 per day. Though India registered remarkable progress in reducing poverty, as per the international poverty line, still it is very high with 176 million people who were living in the extreme poverty line. The present Pandemic COVID19 resulted in further push in absolute number in poor people and IMF estimates that the poor people might get doubled in India. 22 percent of the households are in the lowest consumption of decile who reported washing hands with soap before a meal, as per a 2018 survey. The high concentration of slums without proper facilities in metro cities reduces the efficacy of social distancing measures and also keeps them away from the primary treatment of the COVID19, due to lack of paying capacity for quality health treatment and lack of individual rooms to isolate themselves if they get infected. Further, the strict following of lockdowns pushed them to subsistence wage, and for some without any earning due to complete or partial closure of firms and workplaces. It is almost similar situation in  African countries and a majority of South Asian countries. Now people across the globe are waiting for normalcy in the situation and their survival.

In this situation, leaving the majority of the population of the globe to the market forces of vaccines is not justifiable, because the price of vaccines is not affordable to the poor who are living under the extreme poverty line in the World. Vaccines shall not be hoarded by any country and there shall not be any contrived scarcity of vaccines and medicines of COVID19. Vaccines production must be scaled up as per the requirement of the population, where the present scale of production is not enough to address the global population for the next one year at least. Across the globe, people lost their working days from January 2020, which lead to further economic burden to not only workers but also to the economies of the countries as a whole. Given the acute health crisis due to pandemic across the globe, for the survival of humanity, to save the people, the vaccine manufacturing companies needs to waive off their patents, should transfer the technology and formula of vaccines to the new companies either through royalty or by having consortium with the manufacturing companies across the globe.

Finally, India and South Africa approached the World Trade Organization (WTO) to waive off the patents through TRIPS agreements as per the norms in times of epidemics. The present global health situation is a pandemic, in these times, the entire world should be united in forthcoming WTO meetings for the survival of the people and humanity. All the underdeveloped countries shall be vaccinated when there is a fulfillment of the demand-supply gap of vaccines and vaccine price shall be affordable to all the countries which are possible through massive production by including other companies in the manufacturing process. For this, all the countries across the world should be united and protected and stay away from the Chinese virus. qq

The Author is Assistant Professor, Central University of Karnataka.